U8 to U12 Girls Planet Cup Standings

The Planet Cup was introduced in 2003 as a season-long series recognizing excellence in U14 and under racers.  Standings will be kept for Slalom (SL), Giant Slalom (GS) and the Overall by place points.

Athletes will be broken down by gender and into age classes (U8, U10, U12 and U14) and awarded points for finishes in each race according to the table below.  All Planet Cup competitors must be members of USSA and Region 1 to receive Planet Cup Points.

Races that will count towards Planet Cup will be determined and posted at the beginning of the year, and can be found on spreadsheet links above.  Changes may occur throughout the year based on weather and other circumstances.

Athletes from outside our division are allowed to compete in our races, but their results are not included in tabulating Planet Cup results.  Example, if an athlete from Region 2 participates in one of our races, and places 3rd, the race results will be loaded onto USSS as a 3rd place finish, BUT, for Planet Cup, their result will be removed from the results and everyone will move up a place.  So, the racer that was 4th place is now 3rd place, and so on.

At the end of the season, ties between two or more athletes with the same number of points will first be broken by their best finishes, # of firsts, seconds, thirds and so on (of those races counted in their point total) in the one more than half of the total races held in each discipline and 60% for the overall.  If still a tie, the tie breaker will then be broken by head-to-head competition between the tied athletes in the common races counted towards their point totals. If still tied, the tie will be broken with the results at the Planet Cup finale.

Using all Region 1 SL and GS races for Planet Cup and then counting one more than half (for example 6 out of 10) to potentially score planet cup points allows athletes to skip a race due to scheduling, attending a different race, cost of ski racing, or illness, and it may provide some clarity to the number of races counted when one or more races or runs gets cancelled for some reason or another race or a run gets added because time permits.  The jury will consider what's best for the athletes and it will not consider Planet Cup implications when cancelling a run or adding an additional run at the race venue. 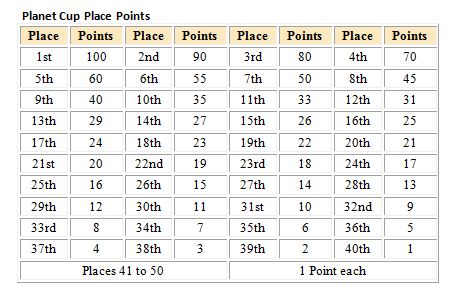